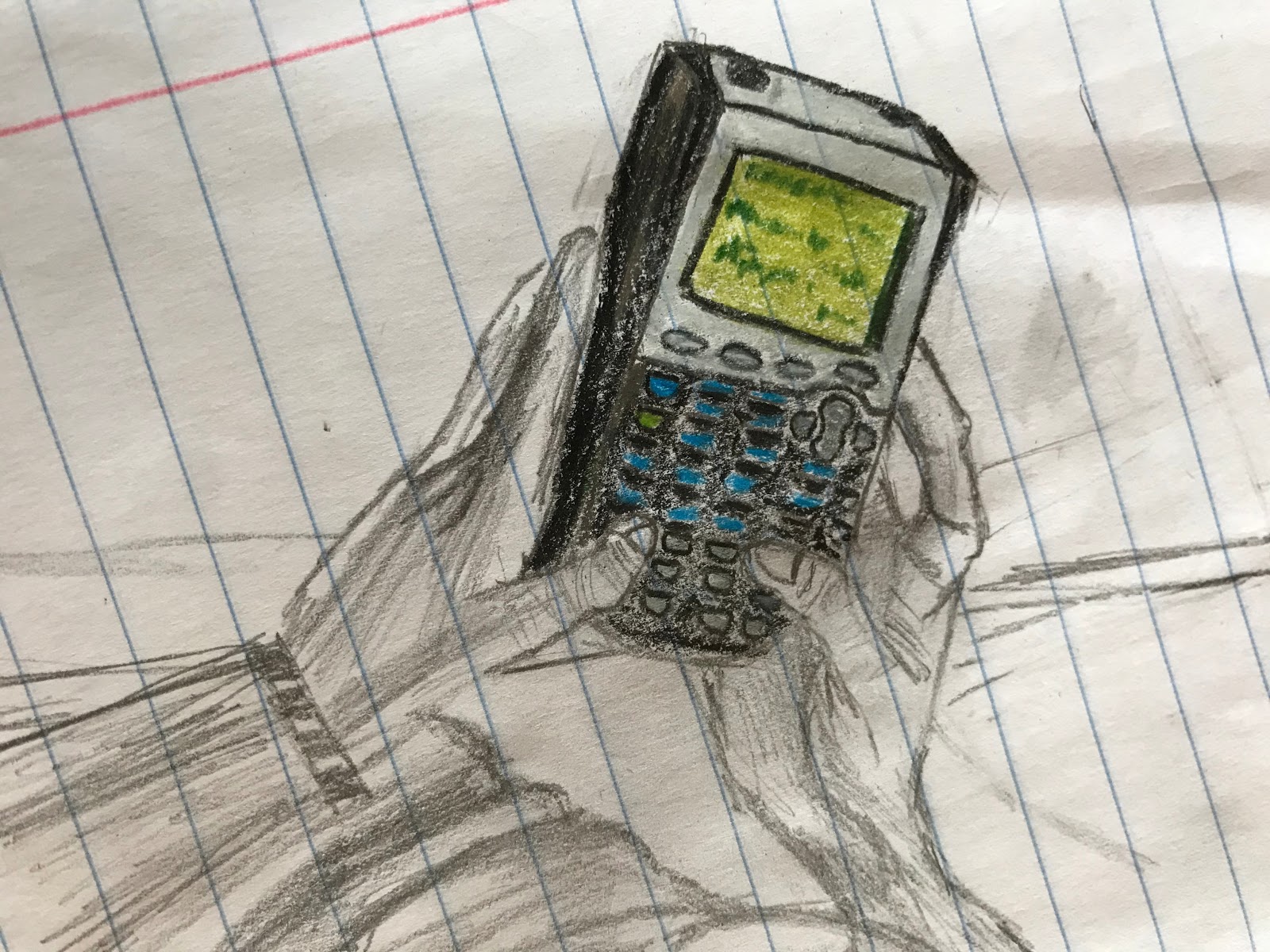 My new life began when a lurching shudder shook the floor beneath me. I remember being surrounded by cold darkness and stale, dusty air.

My back hit the hard, plastic floor as the claustrophobic room jostled around. The murky and translucent walls turned from pitch-black to slightly illuminated. The chamber rocked slightly as it moved before suddenly halting with a groan and loud thump. The unexpected change jolted my supine position and threw me across the hard surface.

A straight line of searing light appeared across the ceiling of the room and began expanding. The muffled noises I had been hearing above turned into voices, tinged with echo. I squinted towards the light and those speaking. A shadow gradually turned into the shape of two enormous human hands that clutched and lifted me upward into the light.

“This is my only spare, so please take care of it, Oliver. Also, you might have to get some new batteries – the ones in there are pretty old.”

A smaller, smoother set of hands clutched and turned me onto my back. A quick, bubble-gum scented breath blew multiple layers of dust off me. As if the lens of a camera had sharpened into focus, a shadowy face materialized.

At that point, I finally shook off the daze and realized what was happening. I had spent months in the shadowy darkness of a cramped container – anxiously awaiting for someone to pick me up. Today was the day I would finally be adopted!

Ever since I was just a pile of metal scraps and plastic, I had always dreamed about the genius who would one day discover me. Preferably, they would have been a highbrow academic – sporting a professional suit and tie that complemented a neatly combed hairpiece. Or perhaps they would be some kind of mad genius in a lab coat, having crooked teeth and shiny eyes glinting with ambition. Together, with me at the helm, we would solve mankind’s most vexing problems and rule the world!

Instead, I was met with a pale teenage face riddled with acne. His blue eyes could barely be seen through the jungle of greasy unkempt hair that hung like a straw mop from his head. He wore denim jeans and a maroon hoodie decorated with grotesque food stains.

Despite his young age, I hoped that the boy was some sort of child genius. Who else would be worthy enough to yield my erudition? After all, when I put my mind to it, I possess the capability to recite over a thousand digits of Pi. I could have graphed the exact position of a black hole within microns of accuracy. Impressed by the Pentagon’s security? I could have hacked into it and started World War III.

So imagine my disappointment when the very first task my new bearer entrusted me with was to solve a question of insultingly simple proportions: 3.5 + 190.7.

Had this boy truly never added two decimals by hand before? I began to suspect that he was not just a regular student, but a frightfully dull one. His questions wouldn’t have been challenging for a 4-year-old, let alone an intellectual like myself. Asking me to perform basic addition was like playing Tetris on a supercomputer, or making NASA build a popcorn machine. Put another way, I had far too much time to learn about the boy I would be stuck with for the next couple of months. His name was Oliver Curtis. After just a week together, his manner and schedule became practically ingrained in my mind: the day would begin with a deep groan. After 3 minutes, Oliver would smash the screen of his phone with a sideways fist to abruptly silence the 7:55 AM alarm. Still rubbing his eyes, he would stumble about his room, careful not to disturb any of the sports memorabilia lining his dresser. After expertly weaving through the knotted clumps of clothes, papers, and muddy cleats on the floor, he would toss me into his backpack. A pair of neon Adidas sports gloves would cushion my fall as paper scraps and dust bunnies kept me company. After narrowly avoiding the avalanche of notebooks and binders that would come bursting in from the ceiling, I would feel the place jostle as Oliver began moving.

At 8:45, he departed from the bus. Dozens of different voices would greet him in front of the school. Occasionally he would converse with others, but his conversations were inaudible from within the backpack. This made the source of Oliver’s popularity a mystery for me; I wasn’t entirely sure why people seemed to ignore his appalling inability to perform long division.

At 1:05 PM he would take me out from his bag for math class. Unfortunately, that classroom was the least productive place in existence. It was astounding that anyone could focus inside of that rat’s nest. Dozens of different voices and sounds scrambled my brain as the loud clamor morphed into an incomprehensible mess of noise. Teenagers swarmed around the whiteboards, squeakily drawing pictures and writing down equations. They would laugh, sigh, yawn, and even cheer as the occasional paper airplane flew by…

Understandably, Oliver resolved to study in peace. At 2:55 PM, his bag would unzip to reveal a glimmer of light. I would feel myself being lifted into the peaceful and calming aura of the library. Ironically, Oliver seemed to find the place rather distressing; most of his time was spent flipping through a thick, glossy textbook and closely examining the questions on every page. I didn’t even bother looking at any of the problems there; basic addition was beneath me. Solving those kinds of problems was a waste of my time – what more could I possibly learn from that book?

As our study sessions stretched for hours and hours, his blue eyes would grow more bloodshot. He would make faces and furrow his eyebrows while chewing his pencil. Throughout December, dark rings began solidifying under his eyelids. His bright smile became less frequent. He began talking less and less, causing fewer people to greet him in the morning. Our tutoring sessions exploded in length as his face began draining of color.

I scoffed. Oliver must have been an imbecile to put all of this work in. These math questions were easy; he even had me to figure out the problems for him! I was pretty apathetic towards the whole thing – nothing in the entire world could be this difficult.

Then, two days before Christmas break, he took the cumulative test.

The once noisy algebra classroom turned into pin-drop silence.

Only the gritty sounds of graphite on paper could be heard. I peered at Oliver and saw him hunched over his metal desk, focusing all of his visual energy on the sheet of paper in front of him. An older lady with semicircle spectacles sat in the very front – sweeping the classroom with her hawk-like eyes. The tension was palpable.

I wanted to chuckle. The situation was nothing short of absurd.

This much pressure for a math test?

I glanced at Oliver’s worksheet to see what all of the fuss was about:

I reread the question, believing that I had missed something. Where were the numbers?

What did that word even mean?

A burning sensation began to grasp my insides as I pointlessly read the same string of text over and over again. A sick feeling turned me inside out; Was this what not knowing felt like?  After seeing so many unfamiliar words, the pressing ache of confusion began enveloping my senses. It was disorienting to see so many words and phrases that had no meaning to me. Panic dominated my mind as I turned to Oliver, looking for some semblance of sense.

I stared in disbelief as he scribbled something down and moved onto the next question. His answer consisted of shapes and drawings that looked like a foreign language to me. Was this even math? Where were the equations? The variables? Before I could even start to make sense of the question, he had seemingly already figured out the answer.

He must’ve been some kind of genius.

Oliver scratched down his response to the last question as I was still processing his work for the first. He pulled the paper out from under me and left his desk to turn the page in.

The shock began wearing off. I felt something different for the first time – a spark of reluctant curiosity, perhaps, even grudging awe. How had he done it? My mind flashed back to that thick, glossy textbook. By the time he had returned to the desk, I wanted to ask a dozen questions. He had to teach me. I needed to learn this.

Instead, I found the world spinning sideways. He clutched me in his left hand and swung me from side to side while walking up to the front desk. The lady looked up at him with her coal-black eyes.

“Mrs. Jones? Thanks for loaning me this for the test”

I felt her ice-cold hands grab hold of my underside, as Oliver’s warm clutch let go.

Every word he had just said was like a punch in the gut, making me feel even more guilty and confused. Was it because I had underestimated him? I desperately tried to get one last look at the boy to frantically apologize.

I was met with a pale white face drained of color. Dark rings hung from his eyelids, emphasizing his muted and bloodshot eyes. He barely even looked alive – unrecognizable from the boy who had first taken me from the box. It was like seeing a ghost; the sight froze me into shock as if I was a deer in headlights.

Staring into space, I barely even noticed the murky walls enveloping the outskirts of my vision. I was placed on a hard plastic floor in the middle of the same cramped chamber I had originally known. A large, leering shadow siphoned the last bits of light away as the ceiling clasped into place, sending vibrations through the walls.

I was in the dark, again.