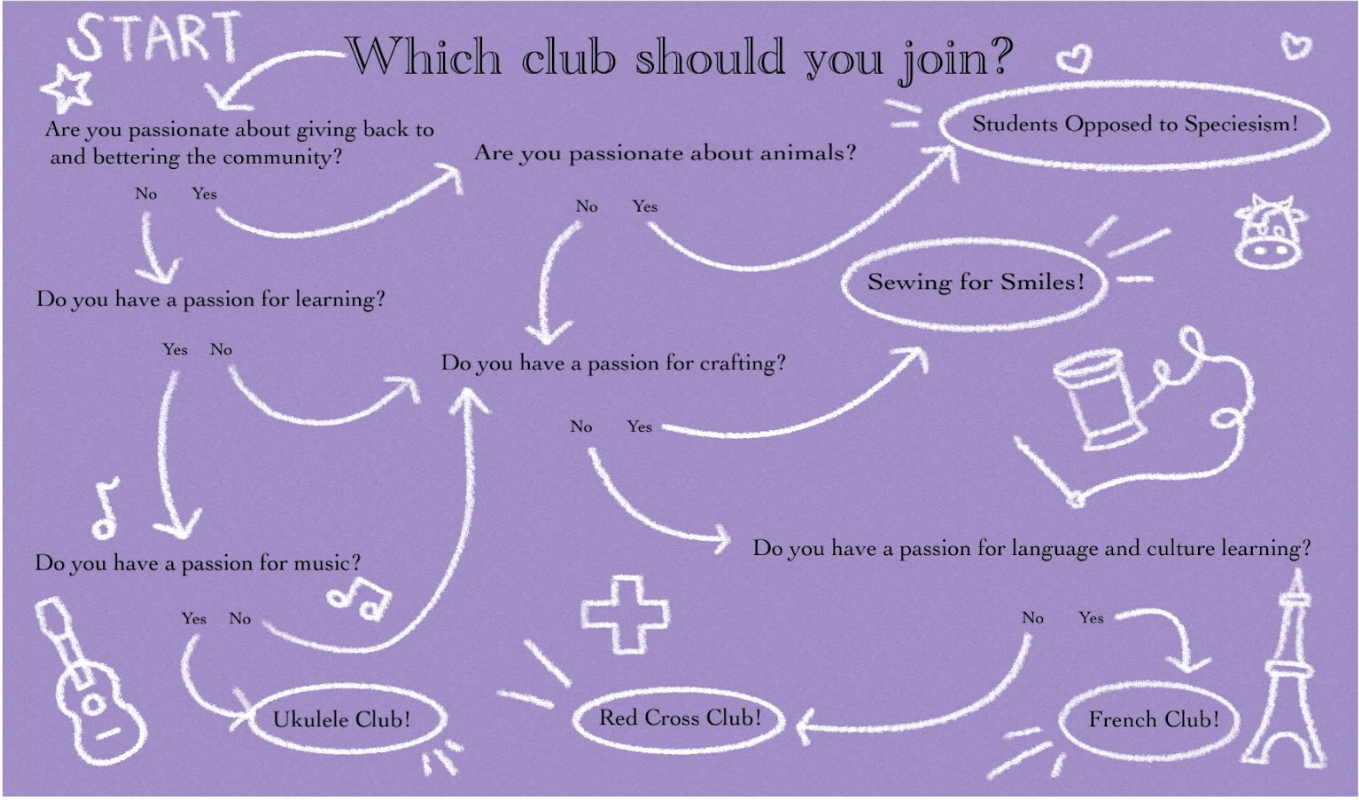 The 2021-2022 school year has begun, and after the club fair on September 15th, club meetings have as well! Have you found your club yet? If not, there’s no need to worry! The CHS Chronicle has compiled a list of fun, brand-new clubs at CHS that you might not know about! Take the quiz above to receive a recommendation of a club you might be interested in! After getting sorted into a club, simply read the small excerpt on that club to learn more! Though club meetings have already started for the year, it is not too late to join! Whether you decide to join this year or the next, hopefully this article will help you learn about some clubs!

Language clubs may seem daunting to join if you do not take the language or are not proficient in it. Because of this, many students are reluctant to join these clubs and may automatically cross them off their lists. However, language clubs do not focus on speaking or reading the language but instead put a spotlight on their culture! One particular language club, the French Club, is known for its fun cultural activities, which include watching French films, hosting trivia contests, making French food, and eating at nearby French restaurants! These past activities are only a small glimpse of what the French club has to offer. Elena Wang, president of the French club, says, “Personally, […] my favorite aspect of the French Club is the variety in the events we coordinate”. With an especially large board this year, Elena predicts that there will be many more fun, new activities!

Calling all crafty CHS students: the Sewing for Smiles club may be the club for you! This club feeds the heart and mind by allowing students to learn a new skill while spreading kindness throughout the world! All projects made in Sewing for Smiles will be donated to hospitals, nursing homes, and more. Whether it’s blankets for babies in the NICU or custom-designed bags for the elderly’s walkers, projects are sure to put a smile on their recipients’ faces! Grace Kneebone, vice president of the club, says, “We try to do semi-easy projects so that way anyone in the school can join and it’s not limited to people who are super good at sewing.” So, fear not if you have never sewed before! The club will teach and provide you with everything you need to know. The Sewing for Smiles club also allows your creativity to fly free! “With each project, there’s tons of varieties you can choose [from], like patterns, [fabric types, etc],” says Cate Eigen, club president. Join the club for casual, fun meetings that consist of eating, chatting, and, of course, sewing!

SOS, or Students Opposed to Speciesism, is a club that promotes awareness for animal liberation. The club meetings usually consist of “interactive activities,” says Club President Charlotte Bandekow. These include vegan cooking days, vegan documentary screening days, and more! All students interested are welcome to join the club as long as they are interested in learning about speciesism! Charlotte adds, “A lot of these informational sessions might come from demand,” allowing club members to learn about what they are interested in. Who knows—this club might even encourage you to make small but powerful changes to your own lifestyle!

The Red Cross Club, associated with the Red Cross organization, furthers the mission of the latter by making a meaningful impact on the community. Club President Peter Wang says, “We want to give students an additional way to benefit our community, and they can do so through a variety of ways here at the Red Cross Club.” Events include fundraisers, blood drives, and more! Students who want to positively impact the community should consider joining! Meetings are relatively short and held twice a month. The Red Cross Club is also an effective way to get service hours.

Though the Ukulele Club was created a few years ago, it has now been brought back in full swing by Club President Isabel Chan! The club consists of casual meetings filled with playing the ukulele and singing songs as a group. Isabel says that she will usually “set it up so [club members are] playing certain songs of the day…[She will] usually pick out songs that are easier and then…some that are harder for the more experienced people.” No previous knowledge of music or ukuleles is needed, so anyone can join! If you are considering joining, feel free to bring your own ukulele to the meeting!