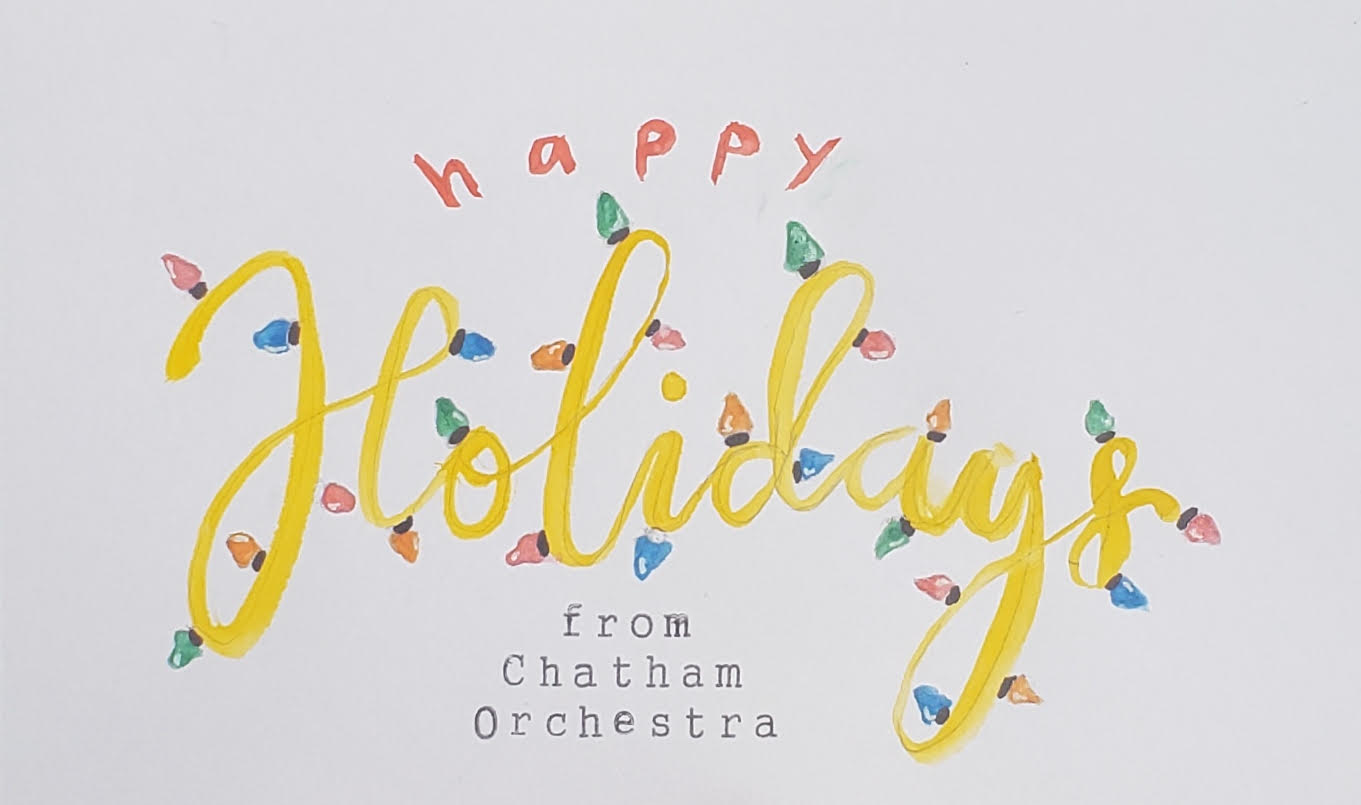 During a normal school year, the Chatham Music Department would be having its annual holiday concerts around this time of year. Due to COVID-19 complications, however, some ensembles are having difficulty finding a safe, socially-distanced method of gathering together students to put on a performance.

In spite of the pandemic, the choir ensembles were able to spread holiday cheer with their impressively synchronized virtual concerts. Students worked diligently to create individual recordings using practice tracks with metronomes provided by choirmaster Mr. Kenneth Bryson, which were then merged by editors. The videos include creative and often comical compilations of the students doing various holiday-themed activities.

While the CHS string ensembles did not perform for the holidays, they are remaining optimistic and preparing pieces using the SmartMusic software in hopes that the new year will bring a time when they can safely hold some form of physical concert. Orchestra students are also advancing their knowledge of music history and music theory. Band director Mr. Brian Conti did not respond to requests for comment on the activities of the wind and band ensembles, although students mentioned that the concert band played “Realms of Glory” and the wind ensemble performed Leroy Anderson’s “Sleigh Ride” at their virtual concerts.

To acquire more insight, the Chronicle surveyed students from the orchestra and chorus ensembles and inquired about their favorite songs or pieces that they were working on in class In the concert orchestra, 71% of students surveyed preferred Shirl Jae Atwell’s fast-paced “Motif.” In spring of the previous school year, the concert orchestra practiced “Akerwis,” another piece by the same composer, but did not have the chance to perform it. Second violinists in particular favored “Motif” because they do not play the melody in the other piece that the concert orchestra is preparing, Henry Alshin’s familiar “Danny Boy.” The chamber orchestra is playing only one piece this year; “Point Lookout” by Brian Balmages is a tribute to Maryland’s Point Lookout State Park, a preservation of a prisoner-of-war camp during the Civil War.

The choir ensembles worked on a total of eight holiday songs, with 69% of the concert choir student sample preferring a one-minute acapella rendition of “Jingle Bells,” which many students described as “upbeat,” and 69% of the Chatham Voices favoring “White Winter Hymnal” by acapella group Pentatonix. For the Chatham Select Choir, the consensus was that “Dance of the Sugar Plum Fairy” by Pyotr Ilyich Tchaikovsky was the ensemble favorite, but tenors tended to prefer “Silent Night.” Other songs included “Grownup Christmas List” and “Jingle Bell Rock,” performed by Chatham Voices, Pinkzebra’s “Winter Lullaby,” performed by the concert choir, and “Let It Snow,” performed by the select choir.

Outside of school, many students will be performing for or with their families or participating in church choirs over the break. Others will simply take the time to refresh for the new year. Multiple members of the ensembles plan to put their talents to use in order to bring others some holiday spirit and spread kindness during the holiday season. One student plans to carol at a senior rehabilitation center, as per the annual family tradition. The event is set to take place with alterations but will occur nonetheless in order to bring seniors some joy. Roma Welsh, the leader of the Violin II section of the concert orchestra, plans on making recordings of her friends’ favorite songs using her violin and other instruments to present to them as a Christmas gift. Whether they are jamming out to Michael Bublé, wishing their friends and family a mele kalikimaka with their ukuleles, or preparing to become part of the tambourine ensemble, most students are determined to keep their skills intact over the break, a fact which should keep teachers mollified.

Students also made some music-related New Year’s resolutions. Beyond just practicing more, being accepted into a higher level music course or the Honors Music Program, improving vibrato, posture, and breath control, learning a new instrument, and building the confidence to take on solos and to learn more challenging songs or pieces were among the most popular aspirations.

As for what can be improved upon and what should remain the same in the new year, when asked what they enjoyed most about virtual music classes, most students stated that they were happy to be able to focus on improving as an individual member of the ensemble. Students also enjoyed being able to learn about music beyond the scope of the concert hall.

“We’ve been able to explore different applications of music outside of singing,” Grace Petersen, who is part of the Honors Select Choir, disclosed. “We’ve studied vocal anatomy, beatboxing, and the scientific capability to implant a vocal box within a person who [has] lost the ability to speak.”

One concert orchestra student added, “We got to touch upon other aspects of music, like… music theory. We [do] not just have to play our instrument [for] the whole class period.”

Others were glad that in spite of remote learning, music classes still provided a tight-knit community and time for relaxation.

“It’s easy to get stressed out [with] this atypical way of learning, so having a class where we listen [to] and learn music is the perfect way to regroup and enjoy a class during the day. I also appreciate that we still find ways to communicate and get to know one another, which is something special about the music community. In most of my classes, people are pretty quiet on Google Meets, but in choir, everyone is always enjoying and making the most out of our virtual classes,” Caroline Himstreet said of her concert choir classes.

Not everyone agrees with Himstreet, though. Megan Andreasen, who is also a member of the concert choir, argued, “It’s extremely difficult to connect with my peers. The performing arts have a way of drawing people together and creating a family, but this is nearly impossible to do when you’re forced to converse through Google Meet instead of getting to know each other through casual conversation in person.”

“It is difficult to help out the rest of my section while I am virtual… I struggle with how to run our individual lessons with our sections, sectionals, without being in person with them,” Welsh agreed.

Despite obstacles, the Chatham High School Music Department has been able to and will continue to work collaboratively and arduously to bring people together in a time when it seems that everyone is being forced apart. Ring in the new year by watching their virtual concerts on Mr. James Lawrence’s Youtube channel, or use the links below to access the performances.

Dance of the Sugar Plum Fairy