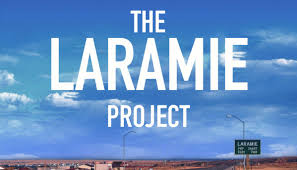 For this year’s fall production, CHS presents The Laramie Project, an interview-style drama that takes place in Wyoming after the torture and murder of Matthew Shepard, a gay college student. The show brings awareness to the extremity of hate and encourages communities to promote and foster acceptance.

One of the challenges of this year’s production was choosing a production that would work during the pandemic. The selected show had to allow for proper social distancing among actors and had to work with a staggered schedule, meaning that the cast could never run through the entire show at once. Director Mrs. Russo had to go through the difficult process of selecting the show: “I needed to find a piece in which the actors did not touch and could be spaced six feet apart on stage so that masks can be removed, and we can see and hear the actors. I did not want to sacrifice content and production value and choose a show that was ‘written for quarantine’ as many schools are having to do right now. I belong to a Theatre Educator’s Forum, and a member mentioned he was doing The Laramie Project.  I immediately knew that we could make that work at CHS.” Cast member Shobhit Samar (Sergeant Hing) also commented about how this particular show works well with the new safety rules and precautions, saying “the way the show is written lends itself to that.”

It is clear that the show’s message is still relevant to today’s society. Junior Lola Alvarado (Narrator, Zubaida Ula) noted that “it really opens your eyes to exactly what LGBTQ people go through every day.”

“I’m happy we get to do this show,” said senior Tanner Clark (Aaron Kreifels, Russell Henderson) “because it’s really crucial to spreading awareness of the hate the LGBTQ community receives and showing people that enough is enough.” Shobhit agreed on the relevance of the show. He said that “the issues discussed in the play still exist across society, and it’s very important to talk about them. This isn’t just an isolated incident. Things like this happened and are still happening. We have to look at ourselves as a society and figure out the right way forward, to move past hate and bigotry, so that something like this never happens again.” CHS junior Braden Mellina (Moises Kaufman, Harry Woods) agreed as well. He commented that the show fosters ideas of acceptance and integrity, such as the idea that “communities need to be responsible for their actions and intolerance.” It is important to note that the show’s relevance spreads beyond members of the LGBTQ community. “The Laramie Project shows the true effects of discrimination, something that I feel everyone has seen or experienced at least once in their life,” explained Tanner. Lola Alvarado noted that The Laramie Project is “relevant to every single person on earth,” regardless of their sexual orientation.

Another interesting aspect of the show is the fact that the characters are real people, many of whom are still alive today. Lola explained the importance of remembering this when portraying her character, Zubaida. She stated that she “constantly has to keep in mind that this isn’t a character she can manipulate and play with. This is a real, human being,” Lola added, “who is alive and living her life right in this moment.”

Like most aspects of 2020, this year’s fall production is not typical by any means. The cast is required to wear masks and socially distance, and rehearsals are staggered to avoid the entire cast being in one place at the same time. In addition, there will be no live performance. The production is being filmed and will be available for streaming in early December.

It is clear that the cast definitely misses many aspects of pre-pandemic ChaTheater productions. Braden Mellina shared that “there’s a harsh truth in knowing that the audience we will have this year likely won’t be as large as it has been in previous years.” Shobhit also commented on the differences: “being six feet apart is different than we are used to, and we have staggered rehearsals, meaning I don’t see as many of my castmates as usual.”

Although the cast members wish they could have a typical show, they know that the safety precautions are necessary for safety and are grateful for the opportunity to perform. “It allows us to have a show at all, which I’m grateful for,” explained Shobhit. “I realize this is an unusual way to perform,” said Mrs. Russo, “but it has been so amazing to share this piece with my students and to be able to produce theatre again.”Stream The Laramie Project! The show is available for streaming on December 4th and 5th. Starting November 30th, tickets can be purchased on the website ShowTix4U. Please note that The Laramie Project has a mature content warning and is recommended for ages 13 and up.