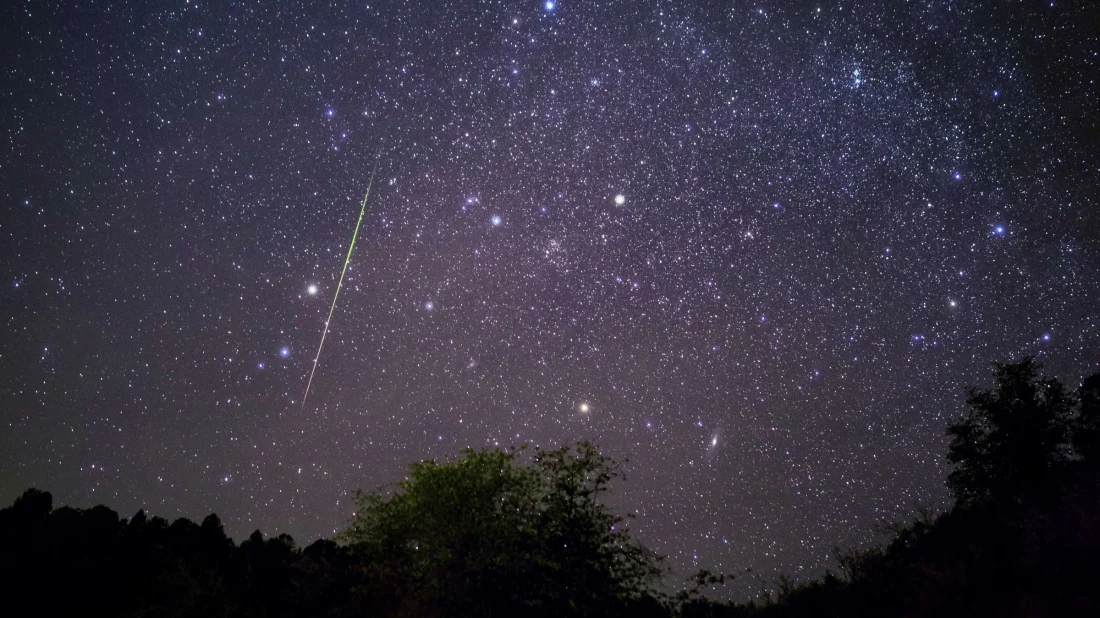 The Mystery of Meteors

The night sky is full of a great many mysteries- some that may never be solved. But among these mysteries, there is much that science has been able to debunk, one of these many things being meteors. For years, it was believed that meteors meant the end of the world- that an angry god was sending his wrath down upon mankind as a warning. It was believed meteors were merely a phenomenon. That is, until one cold November night, 187 years ago. That night, science learned a bit more about the sky.

Setting it Straight– What are Meteoroids, Meteors, and Meteorites?

Meteoroids, meteors, meteorites. These three words, often used incorrectly, are actually three completely different (but related) space terms. A meteoroid is a hunk of space debris, typically rock or iron, that orbits the sun. Think of them like asteroids on a much smaller scale; and for those of you who do not know what asteroids are, asteroids are small (in comparison to planets) rocky bodies that orbit the sun, a result of leftover space debris from the formation of what is now the solar system. Meteoroids can be formed in one of two ways. Typically, they are formed by the collision of two larger asteroids. When these asteroids collide, large chunks of rock chip off: resulting in meteoroids. However, meteoroids are also the debris shed by comets. During a comet’s orbit, when it is closest to the sun, the nucleus will shed gas and dust. The comet’s dust tail is composed of thousands of smaller meteoroids. Meteoroids shed by a comet often travel through space together in what is known as a meteoroid stream.

Sometimes during the collision of asteroids, the meteoroids are thrown off of their natural course in the asteroid belt, and they are sent spiraling towards earth or the moon. As soon as a meteoroid enters the earth’s atmosphere, it becomes a meteor. Air resistance from the atmosphere causes these meteors to appear glowing, thus the nickname (which most are more familiar with) a shooting star. Meteor showers are a result of the earth passing through the dust of a comet’s tail.

The vast majority of meteors that are sent on a collision course with the earth’s atmosphere disintegrate during their trip through. Those few that make it through to hit earth’s glorious surface now become meteorites.

The Birth of Modern Meteor Science- What is the Leonid Meteor Shower?

Now, to get to the whole point of this article- the Leonids. Stemming from the tail of Comet Tempel-Tuttle, a comet comparable in size to Manhattan and larger than 99% of asteroids, this meteor shower radiates from a point in the constellation Leo, thus its name. The Leonid Meteor shower happens annually but peaks in a Meteor storm approximately every 33 years. This fast-moving stream of meteors impacts earth atmosphere at 72 km a second with an average shower distributing 12- 13 tons of particles across the planet during its November romp. The annual showers are made up of about 1,000 meteors per hour, but the most magnificent storms have exceeded 100,000 meteors per hour.

The Great Meteor Storm of 1833

The day is November 12, 1833. The night is cold and clear, and physicist/astronomer Denison Olmsted is awoken by the ruckus of his neighbors. The sky opened up to the heavens and stars poured out onto the earth- mother nature’s firework show for all of America, and it was during this night of falling stars that Olmsted observed something that no other astronomer had ever noticed before. All the balls of fire seemed to be coming from one spot in the sky- he called this the radiant- located in the constellation Leo. Naturally, Olmsted wanted to investigate this huge discovery, so he immediately drafted a letter to the New Haven Daily Herald, and the letter spread like wildfire in papers all throughout the nation. Olmsted urged readers to send in anything and everything they had noticed about this nationwide phenomenon and he used this information from everyday people to help him better understand some of his own theories. Through all his findings, Olmsted realized that meteors must be of a cosmic nature coming from space debris rather than a phenomenon of the sky. Olmsted also noticed that these “falling stars” must be smacking into the earth from outer space and they must be from something in a very elongated orbit around the sun. In January of 1834, Olmsted presented his findings to the American Journal of Science and Arts.

After the Great Meteor Shower of 1833, the Leonids seemed to have disappeared. Then, in 1866, it happened again. Once more, the sky opened up to drop its stars onto the earth. This time around, scientists observed that these meteor showers were the result of earth-orbiting through a leftover trail of dust left behind by comet tails. They also realized this particular trail was left by the Comet Tempel-Tuttle. The falling stars were admired by many until the end of the night and disappeared once again, not reappearing until 1966.

Through the years, more and more have been observed and discovered about meteoroids and meteor showers, and more has been learned about the Leonids. Most interestingly, scientists were able to conclude through a long series of observations that the 1833 Leonids meteor shower was caused by impact with Tempel Tuttle’s 1800’s dust trail. The 1866 storm was due to meteors left behind in 1733, the storm in 1966 as a result of 1899 dust, and the most recent 2001 and 2002 double spikes came from a dust trail left behind in 1767 and 1866. It was later discovered that the Leonids have been observed since 900 AD but were not yet recognized as a recurring event.

How Can I See The Leonids Meteor Shower?

Although the next intense meteor storm will not be for another decade or so, the Leonids is an annual Meteor Shower that is still visible every November! This year, the Leonids will peak around November 16 and 17. No special equipment is needed to see the Leonids, and the optimal time of visibility is after midnight. If you do not see anything right away, be patient. It is important to let your eyes adjust to the darkness first- this will allow you to observe the sky better. It is also important to enjoy the Leonids while we still can because it is estimated that in the future, Jupiter will interrupt the dust path of the Leonids making huge storms unlikely for a very long time. So, set a reminder for November 16, grab a friend and a blanket, and go wish on a shooting star- or more accurately a couple of thousand!