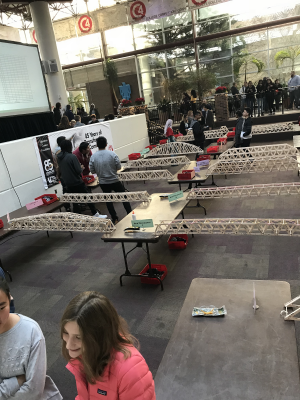 The club has been run by Mr. Mariano for several years. The bridges were made out of string and light wood. The majority of the beams were required to be under two pounds, only 4 inches wide, and were expected hold 100 to 400 pounds in competition! To accomplish this, teams spent a lot of time time working on designs which would be strong and light.

Room C141 is not your average classroom. The club was my first introduction to several power tools that I never knew existed before. From using table electric sanders, drills, and bandsaws, I was excited to try all of them from the moment I entered the room. We also experimented with several different tools, such a miniature hand saw or a seemingly confusing contraption that simply acts like a clamp. Although I was covered with sawdust at the end of each meeting, the experience I had was different than any other class or club I have ever been a part of before.

During competition, two members from each team went down to the tables to set up and test the bridges. Weights of 2.5 pounds each were hung from the bottom of the bridge which rested between two tables. The announcer called out where the weights were to be placed, and then students hung the weights in the corresponding location, strategizing how to place them. Every so often, a bridge would collapse onto the floor, and the sound of around 100 metal weights would pierce the anxious chatter of the audience. Several of us were reminded constantly by teachers and judges to stay away from underneath the bridge. When our bridge finally collapsed less than a foot in front of me, my first instinct was to run away from the sound!

Interested in building a bridge? While the bridge competition is over this year, be sure to sign up for the club next year or consider taking the class Introduction to Design and Innovation. A part of the class focuses on building similar bridges with slightly different requirements as the bridges will be tested in a classroom environment.

Mr. Mariano recognizes Senior Thomas Giordano for being an important member of the club for many years.

Members of the club would like to thank Mr. Mariano for running the club, putting in hours of hard work and dedication, and his unique sense of humor!