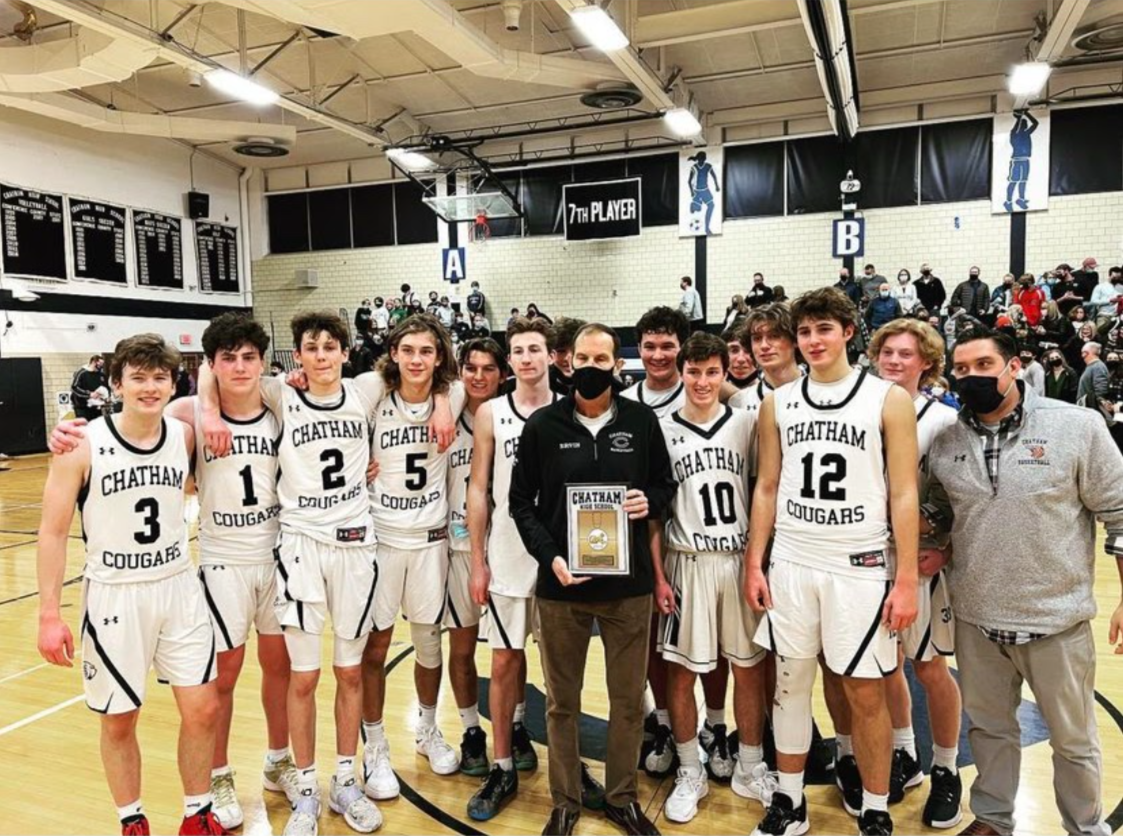 On a cold December 27, Chatham Basketball Coach Todd Ervin beat New Providence in the Cougar Classic in a 69-60 victory, marking his 500th career win as a coach.

Many students at Chatham High School, if not all, know Coach Ervin. He is that beam of light standing outside the entrance to the gym, willing and ready to give you that daily fist bump. He’ll do anything to crack a smile on your face: call you a random nickname, compliment your outfit, or talk to you about any sports event under the sun. What most don’t know about Coach Ervin is that he grew up in Chatham Borough and has been involved in Chatham Boys Basketball for over 50 years. Another fact most students don’t know: this is Ervin’s 30th year coaching.  If Coach Ervin’s sense of humor and heart won’t win you over, his stats will. He has an outstanding 500-264 record at Chatham High School. Throughout his 30 years, his teams have won five Morris County Tournament titles, including three in a row from 2016-18. Under Ervin, Chatham won a Group 2 state title in 2007 and reached a Group 3 state final in 2018. Needless to say, the Chatham Boys Basketball banner is full of years of accomplishments.

Even after 30 years of coaching, Chatham Basketball means the same thing to him each year: coming to every game and being expected to play hard no matter what. This year’s team was no different. According to Ervin, “Every year there is a special group of players. The relationships with the players is the reason I coach.” His goal for this year, unlike any other, is to play hard, play smart, never give up, and, of course, try to win as many games as possible!

Reaching this milestone was more than a year in the making for Ervin, who took a leave of absence last season due to COVID-19. This season, with Ervin back in the game, everyone had very high hopes, and coming into the season with 499 wins, he was confident he would reach such a remarkable achievement. Naturally, his friends and family were anxious about it, which made him anxious as well. Thanks to Ryan Leskauskas’ six 3-pointers to match his career-high of 24 points for Chatham, Cam Rooney’s 21 points, 17 coming from the foul line, and Tim Platek’s 12 points against New Providence on December 27th, the fans erupted in cheers as the clock hit zero to celebrate Coach Ervin’s accomplishment. After such an overwhelming experience, all Ervin felt was relief, then pride. He was thankful that everyone did it, and he would no longer have to listen to people wondering when it was gonna happen. He sat and reflected with nothing but pure pride for his boys, every last one that he coached to the magical number of 500 wins.

Now, Coach Ervin is looking onwards to the Morris County Tournament, where Chatham is ranked as a 9 seed. After beating Dover on January 30th in the Morris County Tournament Preliminary round with an incredible score of 79-47, led by Ryan Leskauskas and Cam Rooney who combined for 51 points, Ervin’s Chatham advances to visit eighth-seeded West Morris in the first round, Saturday, February 5th. After a 59-43 loss to West Morris on January 17th, Ervin and his team are out for vengeance and eager to prove they have what it takes to win.